Five super examples of political marketing on the internet 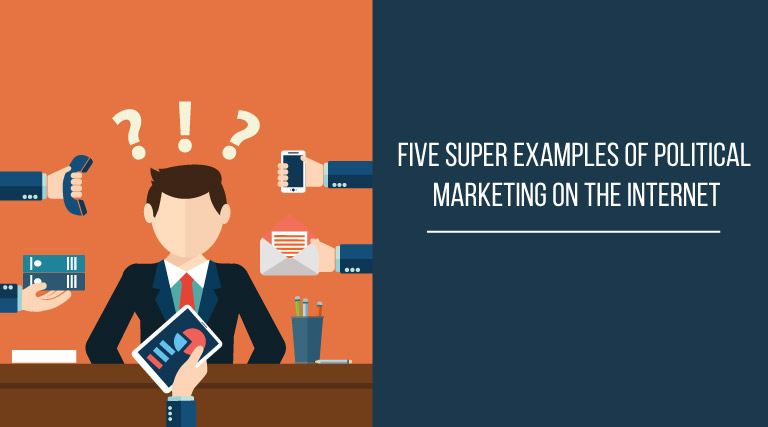 There are current examples of political marketing that it’s interesting that brands and politicians get to know about it. When Barack Obama realized that he would not have the support of the great businessmen to win the elections in 2008, he decided to change and become the first politician 2.0.

The customized tools, resources, and options that make the Internet available to anyone and, of course, its functional use, are those that have made digital marketing have a significant influence on modern politics. Do you want to know how?

The best examples of political marketing 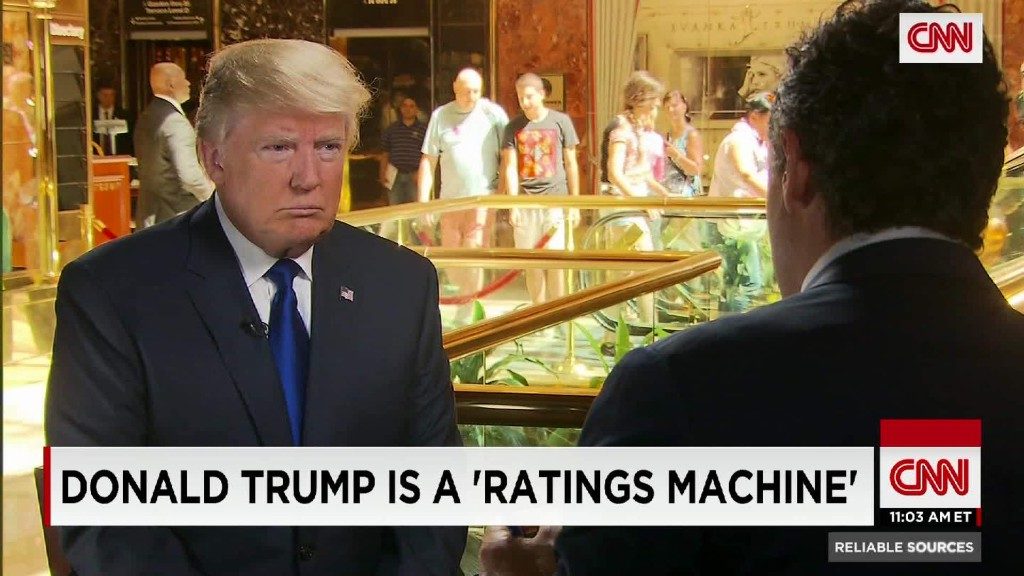 In the early days of Trump’s political marketing campaign, his digital strategist, Brad Parscale, received a small budget with the aim of expanding the database. The strategist made a decision and invested all the money on Facebook ads. To the beginning, it included the names, email addresses and phone numbers of some of Trump followers on the platform.

Then, he chose to use the customized audiences to unite these people with their Facebook profiles. Also, with Facebook’s  “audience segmentation options” tool, ads could take one course or another based on user activity, ethnic affinity, or demographics such as location, age, gender, or interests.

Next, the strategist extended his “radar” using the “similar audience,” a potent tool that allows finding people on Facebook with common qualities. It means, in this case, possible followers of Trump.

Besides, Parscale also implemented software to optimize the design and delivery of the Facebook ads. The campaign generated so many ads that 100,000 different landing pages were created. Each one directed to different segments. As a result, more than 100,000 pieces of content were created.

Among the political marketing examples, it`s interesting to continue with another of the most current. Which, precisely, is linked to two of the most potent channels of the moment: Facebook and Instagram.

It’s about the story of how the Trump campaign used different data to make personalized ads on social networks. He invested 150 million dollars in Facebook and Instagram ads in the last weeks of elections. In this way, it would be able to influence African-Americans and younger women.

Thankfully to a personalized database called “Alamo Project.” This database was created with data from different origins. Both digital and personal contributions and sympathizers to the cause. So, too, he would get some hope from the Hillary Clinton followers`.

As one high-ranking Trump party official at BusinessWeek explained, three essential operations for voter suppression were launched. And all three were targeted to the three sectors that Clinton was focusing on:

However, the best political marketing examples are those that meet their goals in the least expected way. But, also, using tools and resources that are available to anyone.

For example, Trump’s digital team created a Hillary Clinton-style South Park cartoon with a very concise title: “Super Predator.” While the text that was included in the content persuaded as follows: “Hillary thinks that African-Americans are super-predators.”

But that wasn`t all. This image managed to reach those three segments through the publications of hidden Facebook pages.

After the elections, Mark Zuckerberg shared his opinion about that. He pointed out that the idea that Facebook’s “fake news” was the one that influenced the polls was a pretty nuts idea. But the truth is that this investment in the social network had a significant influence.

During the General Assembly of the United Nations (UNGA), citizens from all over the world witnessed how world leaders expressed their ideas. But Trump’s communication during this period is one of the most structured and organized examples of political marketing via Twitter.

No lousy step is taken. Donald Trump has two official accounts, @realDonaldTrump, with 48.6M followers and @POTUS, with 22.4. Both statements are active and reflect a very different communication behavior. 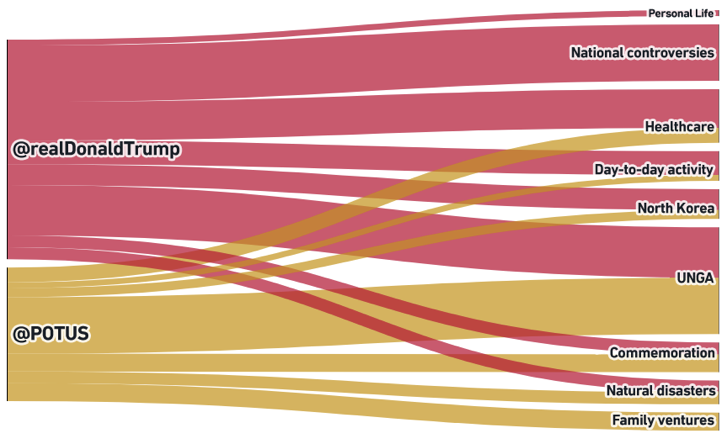 The topics covered in each account are very different. And they are not chosen at random. In addition to the General Assembly of the United Nations, the main topics that were discussed from @POTUS during that period were:

However, the most considered of the @realDonaldTrump account was:

However, 35% of the total tweets of @POTUS were on the UNGA, while @realDonaldTrump had only 19% to this topic.

And what is his message tone?

The tone of the messages he used in @realDonaldTrump account tends to be more direct, controversial and instills personal beliefs, while @POTUS has no voice at all. His strategy focuses on making retweets that leave Trump as a wholly neutral and diplomatic character. 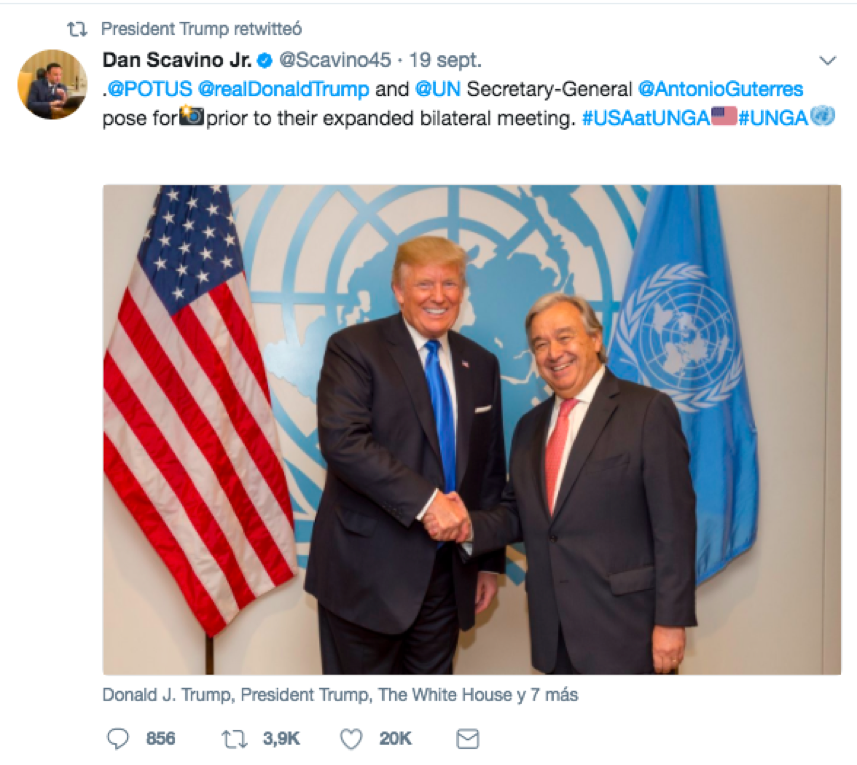 Influence based on mentions

During the Assembly, @POTUS received 151.501 mentions from 59.553 users. While @realDonaldTrump generated 223.396 mentions of 108.448 users. What do these political marketing examples mean? What do these conclusions reveal?

Without hesitation, his account managed to cause a greater engagement in public. Besides, as the profiles of @realDonaldTrump and @POTUS show, both accounts have very different audiences. And this is one of the most straightforward and most evident examples of political marketing you can find.

In this way, the effectiveness of the strategy of each account is confirmed, since each one is used to attract personalized targets.

Tweets & retweets during the UNGA 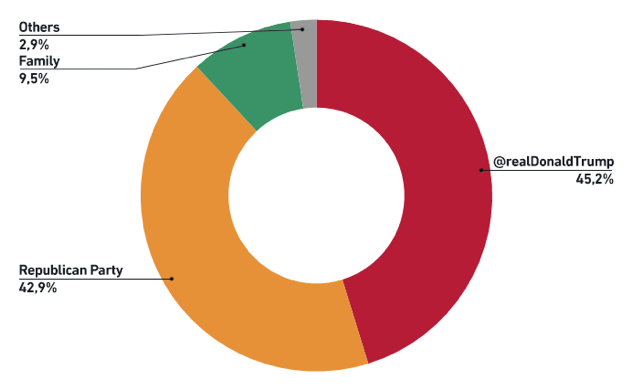 Of the total of @POTUS retweets during the UNGA, 45.2% are from @RealDonaldTrump, 42.9% are from Republican members and 9.5% from the accounts of Trump’s relatives. The contrast is more than evident. 88% of the content of @realDonaldTrump during the UNGA were original tweets written by himself.

However, it is one of the political marketing examples called “the master and the slave,” since the primary function of @POTUS its retweet @realDonaldTrump, other Republicans and their own family. Excluding, thus, the messages that may generate controversies and reinforcing that neutral character profile and diplomatic tone.

However, @realDonaldTrump is the main leader who promotes Trump’s personal opinions towards the United States and the world.

4.- SMS Marketing in the Obama campaign

Another of the most prominent examples of political marketing is Obama, who has also given a lot to talk about. The former president of the United States has given several lessons on how to use digital spaces to create strategies. For example, he taught that:

But there´s more. Obama´s marketing team knew how to apply SMS to publicize different contents. The website “YouObama” was created referring to YouTube to share videos of its political actions and was one of the first political candidates to take advantage on the functions of social networks like Facebook and Twitter. Even so, currently, their profiles are considered absolute success stories.

There are specific contents impact more than others. And a video is the principal. But, do all the political marketing examples have the same potential? If you do a quick search on Youtube with the name of any candidate, you can find hundreds of songs created by followers.

However, you will only find one created by Will.i.am with 30 famous actors and musicians. The song created for Obama.

On the song’s website, YesWeCanSong.com, Will.I.Am says he was inspired to make the video after hearing Obama’s famous speech. In this way, he gathered Jesse Dylan, Bob Dylan’s son, to direct the project.

The video, in black and white format, shows a mix of celebrities singing and speaking words to Obama’s speech in New Hampshire.

The Obama campaign said that it had nothing to do with the creation and distribution of “Yes We Can,” but content as powerful as a video that has the participation of so many influencers, couldn´t be passed.

These political marketing examples prove that organization, planning, and segmentation, are essential to achieving the goals. The rest is to put in place the right tools to make it. Probably, professional platforms. Do you want to get good results? Trust Antevenio.