New emoticons: Learn to use them at its best 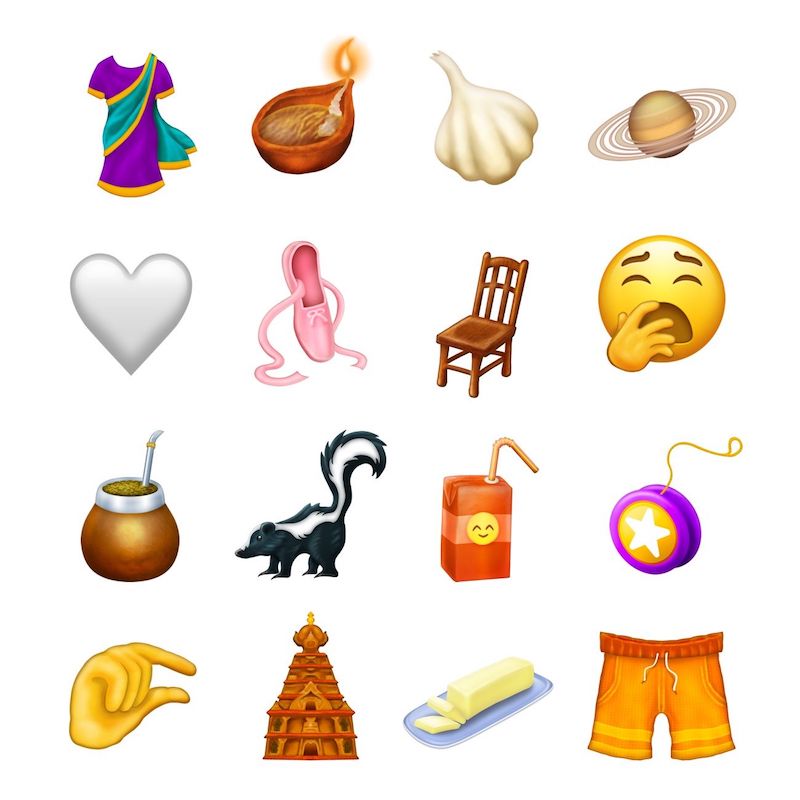 The final list of emojis for this 2019 has been approved by the Unicode Consortium and it includes 230 new emojis that will arrive later this year for all the main platforms.

A flamingo, an otter and a guide dog, as well as a gopher, an Hindu Temple, a safari and a sloth, all together in this list of new emoticons. The circles and squares will have new colors in this version and the most request emoji, a white heart, will be now available.

This new update will broaden the reach of people who can represent themselves, including people with disabilities (proposed by Apple last year), a same sex couple and emojis allowing a combination of skin tones for the emoticon representing two people holding hands.

If you were curious about the new emoticons created for this year, Emojipedia, just updated its images as a demonstration of how these 230 new emojis could look in all the corresponding platforms through 2019. Among the main features you can find:

For the first time ever, Unicode is adding an emoji with two inclusive gender persons holding hands in 2019, with support for different skin tones for each one.

A very interesting update for people who consider themselves gender neutral. Or simply for people who feel their look or style is closer to these new ones than the original looks for the current Female and Male emojis.

Technically, these icons never were meant to be related to a same sex relationship, and its original and official denomination is simply, “People Holding Hands”. But as with any emoji, the meaning is meant to be understood by the context of each person using it. 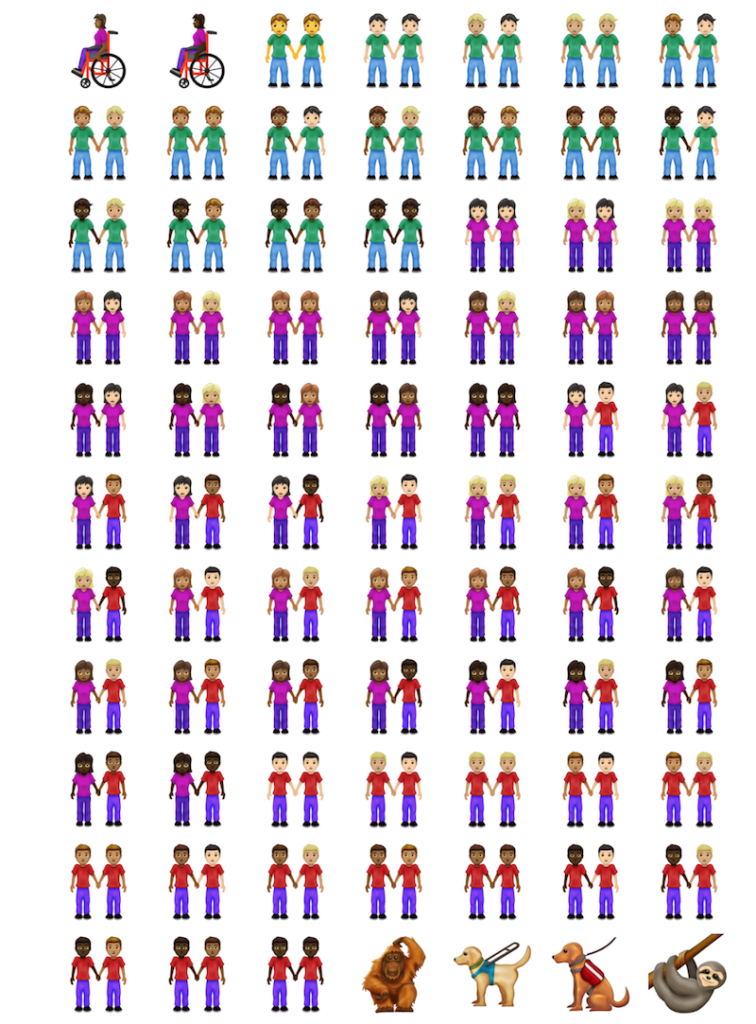 One of the most requested things to Emojipedia was the option to include new emoticons representing black families. Emoji 12.0 doesn’t offer new changes to the family emoji, but, at the same time, offers new colors for all types of people holding hands.

Unicode won’t stop the providers for offering new skin tones in the family emoji, but the RGI (Recommended for General Interchange) emoji list in Emoji 12.0 is focused in the 70 necessary combinations to allow these couples to have all the array of possibilities of color mixtures.

Facebook users already have access to the family emoji with different options for skin tones (125 combinations), and Windows users have a selection allowing them a mix of different skin tone for any family member (52.000 combinations). 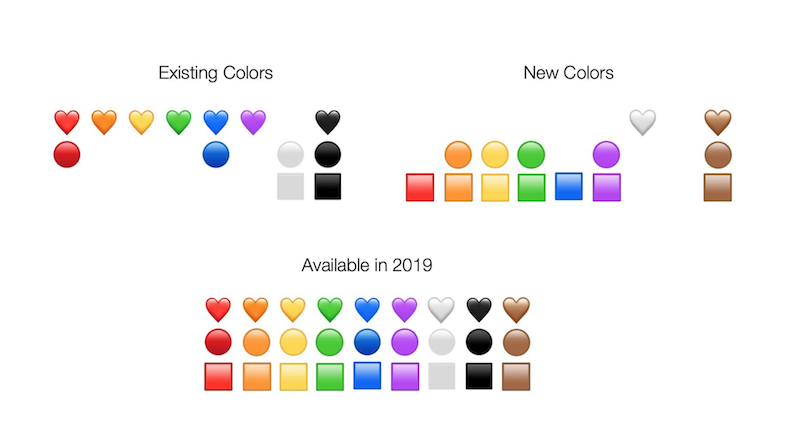 Until now, the combination of available colors for squares, circles and hearts have been improving. Most of the original shapes were added to the Unicode Standard for compatibility reasons. Since then, many new hearts have been added, the black heart in 2016 and the orange heart in 2017, the last colors to complete the heart rainbow.

With the new emoticon update, each shape (squares, circles and hearts) will have the option for the following colors:

Hearts cover almost all these colors and they just added the white and brown heart. The white heart was one of the most requested ones. Before, many people used the White Heart Suit emoji instead. 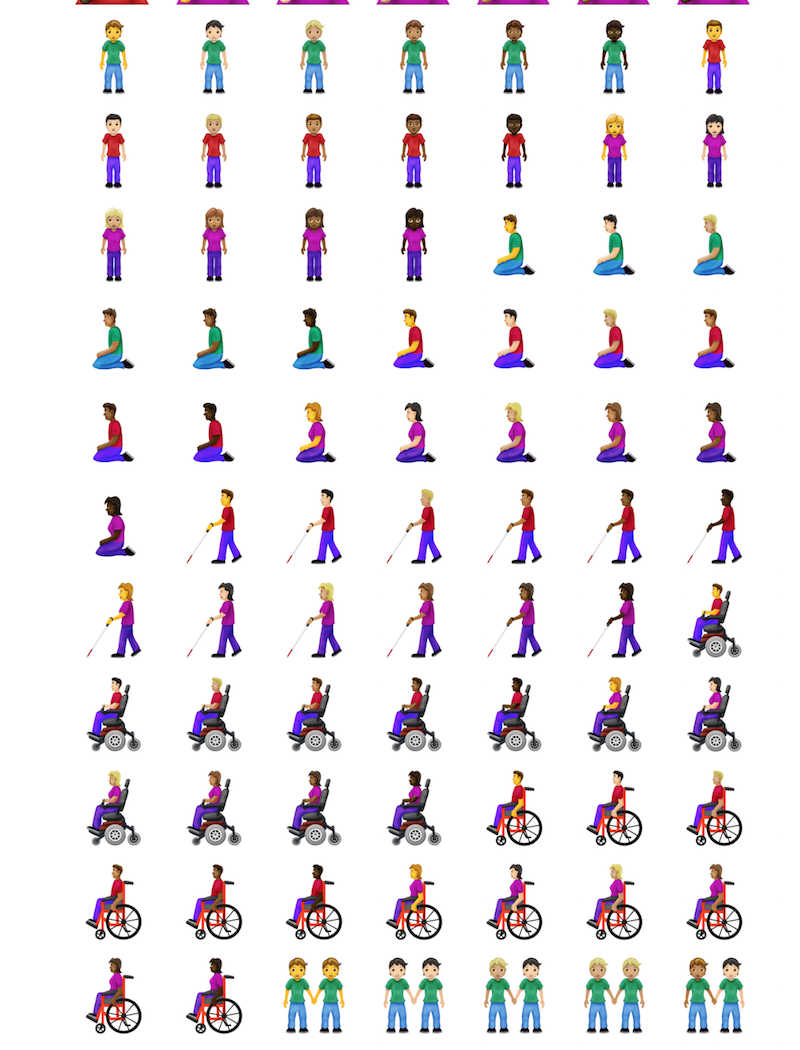 Among the novelties, there’s also new emoticons representing general actions and people with different disabilities. These last ones were proposed by Apple last year. Apple proposed, in total, 13 new emojis when thinking about options for men and women, or 45 in total, when including the options for skin tones.

The new proposed emojis include a guide dog, earphones, prosthetic limbs, as well as people using canes and many types of wheel chairs. 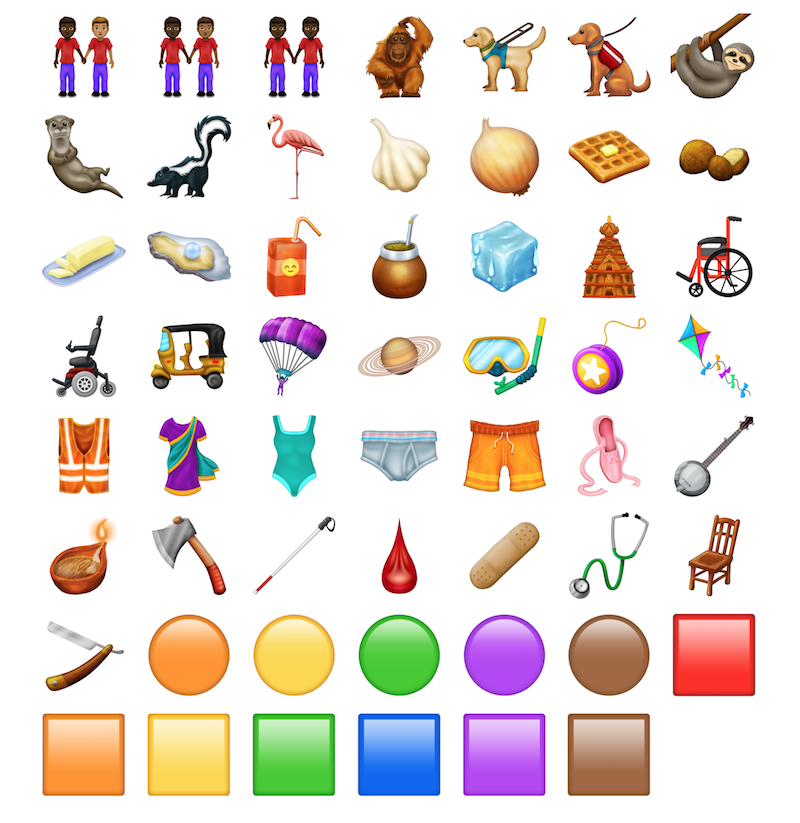 And as with any other update so far, there’s also a new set of emoticons with different themes, as you can see above. A sari, new animals, varied objects, a planet, etc.

But surely you are wondering, when will these arrive to users? For most of the users, these new emojis will arrive to their preferred devices in future software updates through 2019. The Unicode Consortium announced its release for this past March, 5.

And it will be expected to arrive to almost all main operating systems by second half of 2019. In layman terms, these tend to appear in the beta version for Android in August, and for iOS in October or November, as said by the Emojipedia blog.

Why using emojis is an excellent marketing strategy? 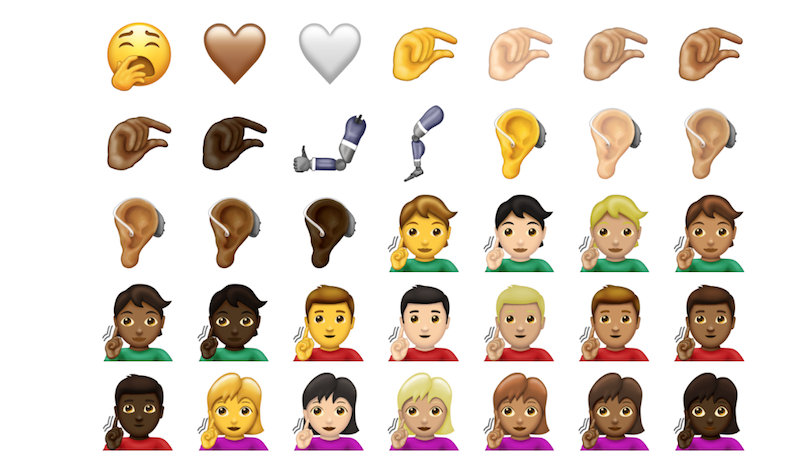 Emojis are synonym to engagement. It has been proved that emojis increase engagement levels, click and click through rate. Look at these statistics:

Have you ever got a text message that ends with a period? Now, think about the content of that message with an exclamation mark or even better, with an emoji. The emotions you express through message are quite different depending on the characters used. By the ending you choose, what you try to convey will change.

While emojis can’t necessarily replace words, nor you should use them like that, they can help you texts get that extra push to excite, persuade or to intrigue. They allow you to make it easier for people to understand the meaning of your message. They are the cherry at the top of your cake.

C.- They give more personality

Brands are more than the products they sell or the design in their logos. Brands have their own identity, their personality and unique characteristics, which help consumers commit and be loyal to them. The use of emojis in marketing and communication strategies gives personality and identity to your brand.

If you are fun and youthful, or bold and ingenious, emojis can help make your brand’s identity a more down to earth identity. Defining and using this personality in your marketing can also help you increase brand awareness. 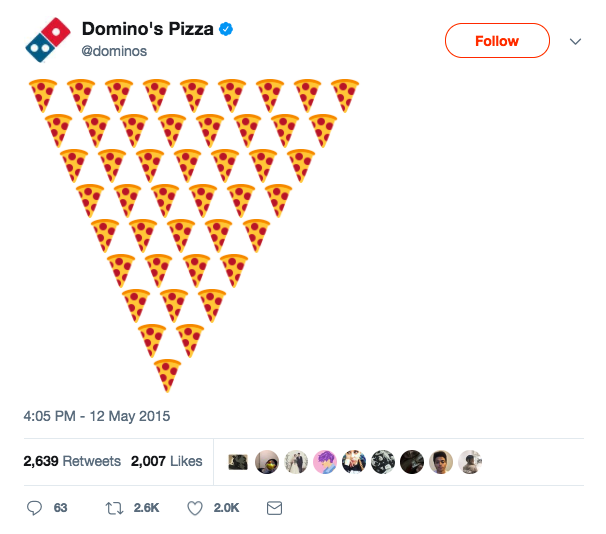 Instead of using them to tell stories, Domino’s decided to use emojis to offer their clients an easier way to order pizzas. They featured a new chatbot option, allowing their clients to order using only a pizza emoji.

To order pizza through the use of emojis, first, clients need to create a Domino’s online account, choose their favorite pizza flavor and link it to their Twitter account. Only then, they could start using the pizza emoji. And such, place an order.

Only during the first day (before going viral), at least 500 people in United Stated used this ordering system through the use of emojis. Also, this ordering concept, using emojis, got an award in the Cannes Lions International Festival of Creativity.

Emojis can also be used to tell short stories and create positive emotions, and that’s what McDonalds did with this campaign. “Having a bad day? Don’t worry, come to McDonald’s, have a bite and you’ll have a great time”.

The nice thing about this marketing campaign is that it tells stories using emojis. They managed to create empathy with their audience and they do it in very fun way, playing at the same type with stereotypes. It shows that an idea, doesn’t have to be complex to be effective. 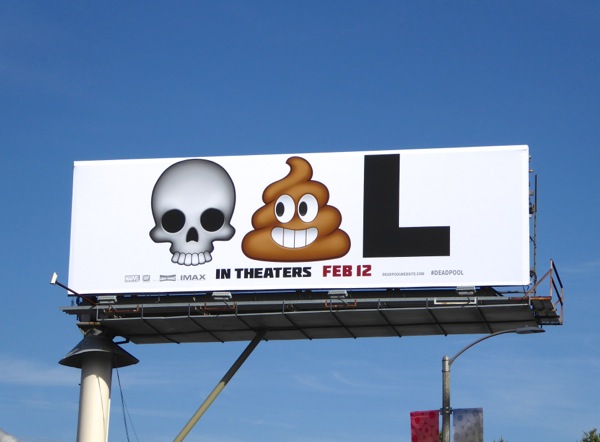 Deadpool’s marketing campaign is probably one of the most successful campaigns using emojis. According to the protagonist, Ryan Reynolds, everything began as a play of words in the movie’s production team WhatsApp chat group. “It was only a joke between colleagues that went insane and decided to place it everywhere on the streets”.

Use emojis in your next marketing strategy to improve user commitement. Being an influencer stratety or simply to improve your target audience awareness, Antevenio reaching to everyone by using unique content.