How to set up an advertising campaign on Twitch. Step by step 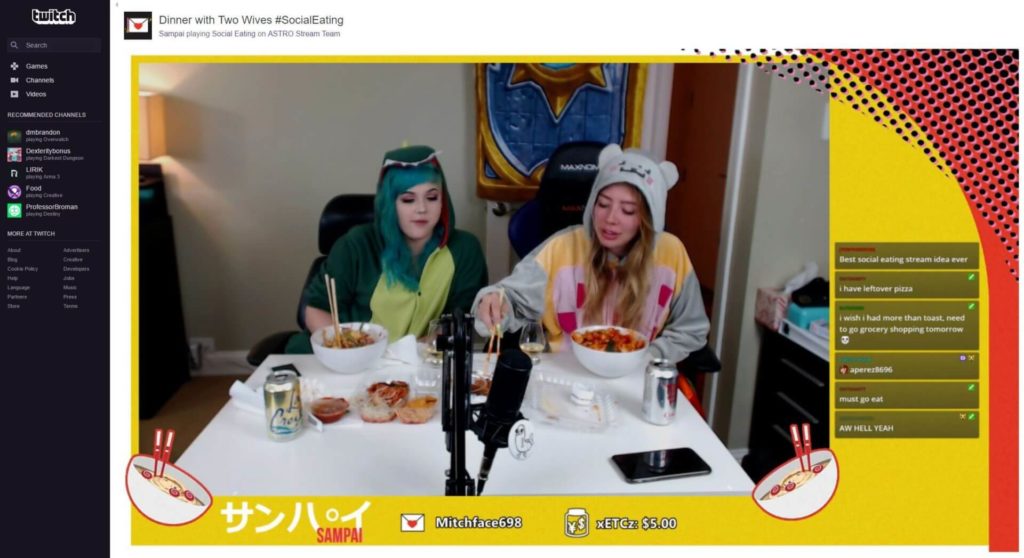 Creating an advertising campaign on Twitch can be the key for your brand to reach an audience that you can’t reach on any other channel. Social networks are one of the biggest allies of brands when it comes to attracting customers, build customer loyalty or even selling through advertising.

Maybe when you understand the opportunities that an advertising campaign can generate on Twitch, you will stop thinking about the other ones.

All this considering that over the years many social platforms have been born and by not obtaining the expected success, have been forced to close or become obsolete. Among them Apple Ping and even Google+.

Meanwhile, other platforms such as Snapchat, Tumblr or LinkedIn have been gaining positions discreetly and are now used by brands and advertisers.

In this scenario, it should be noted that there are also relatively new platforms that, even more discreetly, have managed to become a competition for Internet giants. YouTube, owned by Google, is being highly affected by Twitch, the video streaming platform.

Twitch is nowadays the largest video streaming platform. It started as a streaming video game platform and was acquired by Amazon in 2014 for just under a billion dollars.

Its visual experience is full of information and all kinds of features that attract the attention of users. In most cases, you will see live broadcasts in a game environment. A space that also shows the gamer, with its peripherals, headphones and microphone.

But, is that all that can be found on the platform? Twitch is not just about games. The most popular transmissions include a constant voiceover. Other times you will believe that you are watching an interview while a character is playing.

What stands out about the platform is that content creators continually interact with their audience while they play. That is what generates engagement.

So much that many have been able to afford to quit their jobs and devote themselves to this. Considering that these content creators are paid for the number of their viewers’ subscriptions, you can imagine the power of this platform.

Twitch, a culture based on sharing

If you still don’t understand why an advertising campaign on Twitch is a good idea, this data will change your mind.

Therefore, despite being one of the smallest communities, especially compared to other networks, it stands out for its engagement, its solid community and the high level of interaction it generates.

Twitch creators community is made up of users who not only know how to entertain, but they are also “hyper-shared” when it comes to their content. In fact, users now share their Twitch profile or a link to it in other social profile descriptions. This is an indicator of the strength of this platform.

Why do you need to create an advertising campaign on Twitch?

Launching an advertising campaign on Twitch is a great opportunity for brands. In addition to the above data, you should know that all those viewers are fully hooked to the platform. In fact, it is estimated that they spend more than 1.5 hours a day using Twitch and the 2017 Year in Review data proves it:

You should also know that creating an advertising campaign on Twitch has proved to be a success. Twitch has accepted 27,000 influencers in its Twitch Partnership scheme to monetize its channels and work closely with brands.

A key benefit of being a Twitch partner is that you can share advertising revenue and sell merchandise through official Twitch channels.

What are the chances that you do not find your target audience on this platform? Do you know how to launch an advertising campaign on Twitch? There are several options:

1.- Ads as in other social networks

One of the available options to create an advertising campaign on Twitch is quite similar to what you already know from other platforms. It consists of hiring and creating different types of ads: 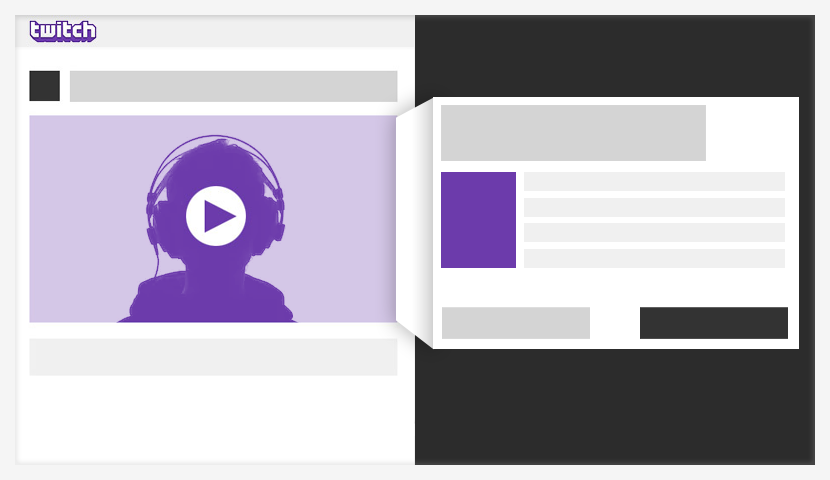 Creating an advertising campaign on Twitch with its format is very simple. The client publishes a “bounty” into the information of his program. From there, influencers who navigate the Bounty Board market will only have to get started with campaigns that they believe match their interests. 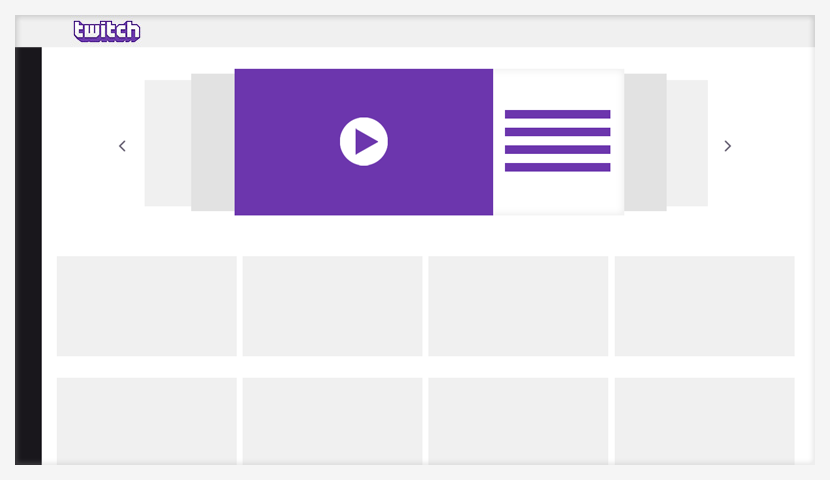 This type of ad consists of promoting the content of your channel in the center of the home page, in the form of a carousel. These are the specifications to follow: 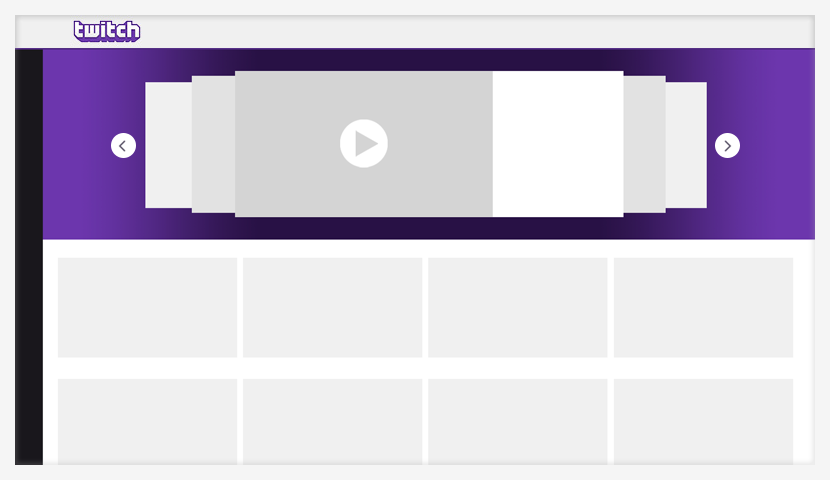 The advertising campaigns on Twitch with this format is composed of three: two final images and a selected hexadecimal color code.

In the template, the brand will have a designated area to add the final images, as well as a mandatory gradient color fade. The faded color will be the selected hexadecimal color to ensure a perfect unit as it grows and expands to varying browser widths, as well as to varied screen resolutions. 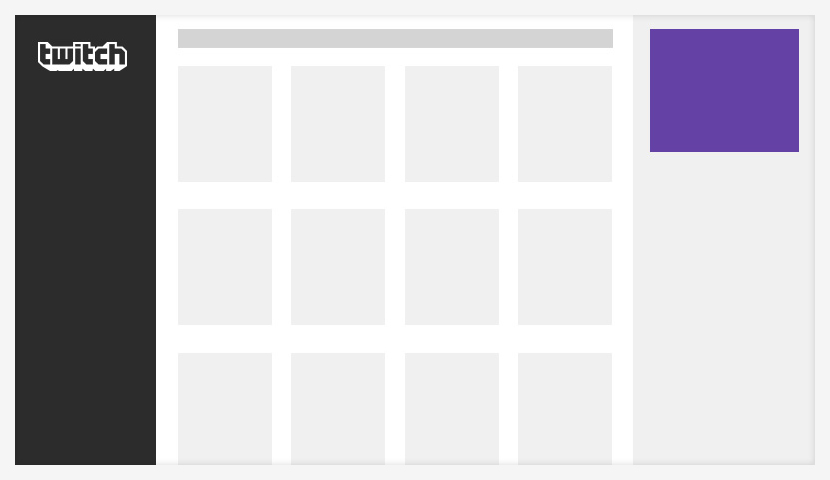 The medium rectangle ad unit keeps viewers interested as they scroll and explore the content. The key locations of these types of ads are: 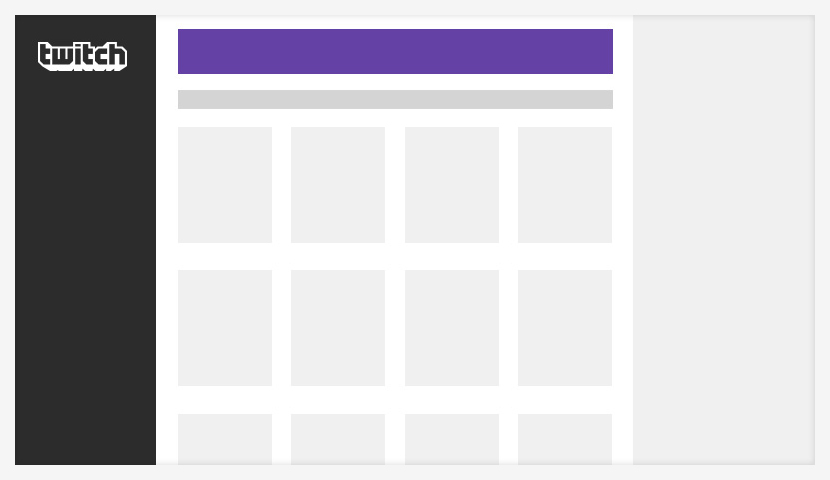 As in the previous example, with this advertising format, the user will be kept informed and will be constantly impacted by the ad. In this case, the ad will be positioned at the top. You can place it both on the game directory page and on the channel directory page.

The option to include synchronized ad units will allow you to amplify your creative assets by allowing them to interact with each other.

To create an advertising campaign on Twitch, you do not have to limit yourself with static ads. Video content is a very good resource to capture the attention of your target audience and achieve the expected results. Therefore, the platform offers you the following formats:

2.- Advertising on each channel

As with partnering with influencers in other social networks, associating your brand with a specific Twitch gamer can be the key to your business success. However, finding that person is always a challenging task. The best thing to do is to follow some guidelines when making the selection:

Read his biography and description

Often, this will indicate the purpose of the broadcast, what type of community they hope to build and the guidelines for participating in the chat and community events. This will give you an idea of ​​the demographic age and the general environment of the streamer community.

Some gamers have good recording equipment, professional scenes and even talk about relevant topics. Therefore, if you are looking for a more attractive representative, observing these types of features will help you.

The game is irrelevant

Most subscribers and fans follow the streamer for his or her attitude, not for the game itself. Your product or service must match the streamer style so that the collaboration seems relevant and organic.

Regardless of the type of advertising campaign you want to launch on Twitch, the truth is that it opens a world of possibilities for many brands.

Are you ready to offer unique experiences that connect with the esports audience? Antevenio can help you define and manage your marketing strategies on Twitch, YouTube Gaming, Mixer or another streaming platform.