How to advertise on Spotify? All the keys 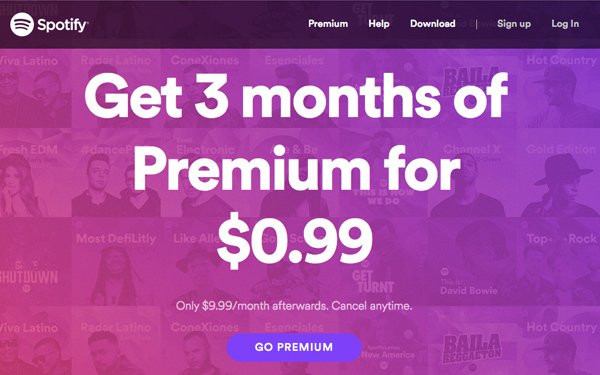 Advertising on Spotify can be one of the keys to success for many brands with interest in a specific type of audience. Spotify has moved quickly to the forefront of the music streaming industry. Companies are taking advantage of the platform’s scope to advertise on Spotify.

Meanwhile, eighty million Spotify users listen to music by paying a premium account without advertising. There is currently an open market of ninety million subscribers who regularly see ads among their favorite songs.

Auditory advertising is not a novelty. It already existed before music playback applications such as Spotify, Apple Music, or Pandora were created.

However, this way of consuming music is what is changing the industry. And of course, the way to advertise in it. Spotify has endless advertising possibilities and may be the perfect choice for your campaign.

Why advertise on Spotify? 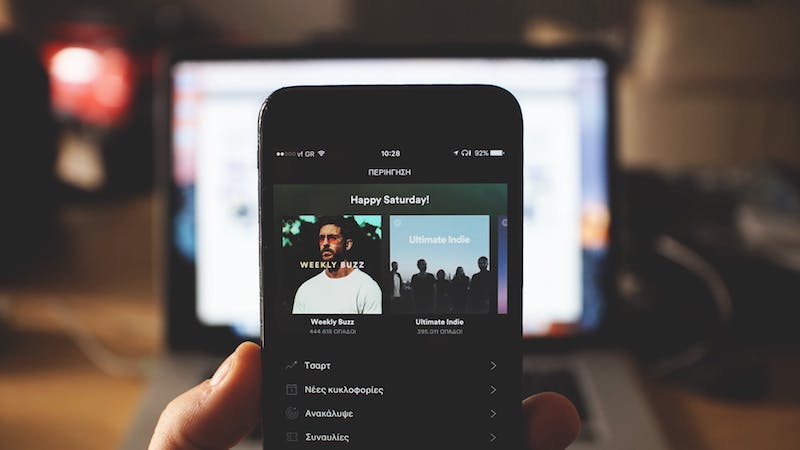 Spotify may seem counter-productive to encourage users to make premium accounts without ads and then encourage brands to create them. However, as Spotify’s product vice president Jason Richman said, the company sees its free version as a separate service that he wants people to use.

The Wall Street Journal reported in 2017 that Spotify was scheduled to become the third largest advertiser in the world. Behind Facebook and Google. Spotify began by offering a free subscription service sponsored by advertising to help music users connect with songs. And of course, with the artists they like. But they quickly realized the opportunity that advertising could offer.

Business Insider said that because of its global scale and huge data collection, Spotify is trying to be a leading advertising solution for almost everyone. Also, for small and medium enterprises.

In this way, Spotify launched in 2017 an advertising platform called Spotify Ad Studio. Another example of the intention to attract more advertising revenue and make it more accessible to smaller companies.

And best of all: Acquisio reports that 75% of listeners expect ads in a free streaming service. Almost 50% say that ads distract less on Spotify than regular radio.

How much does it cost to advertise on Spotify? 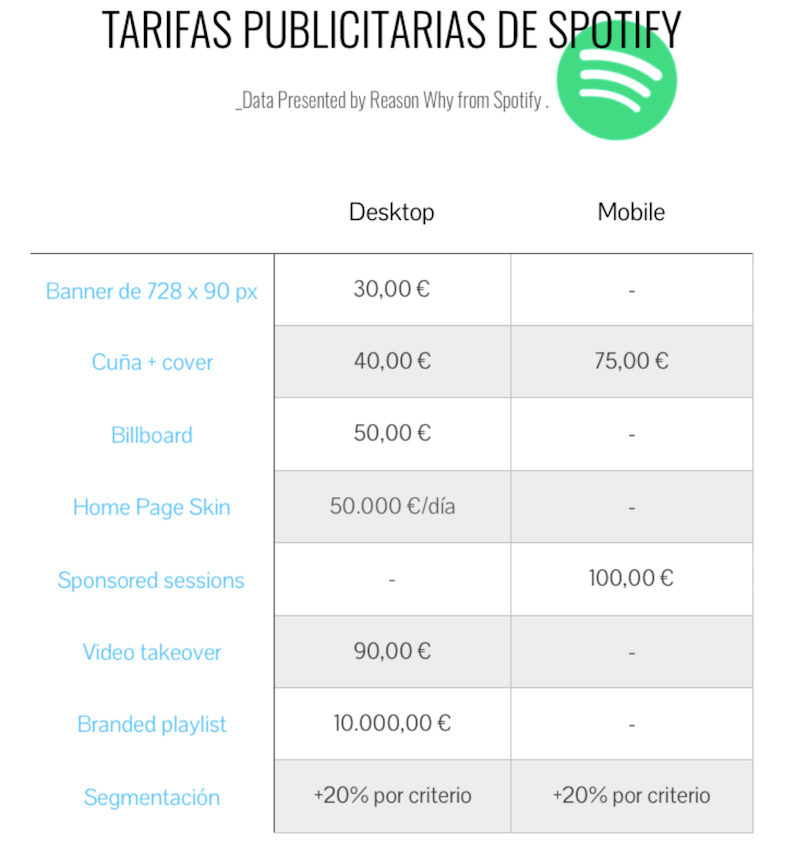 For people who are not familiar Spotify, among some songs, approximately every fifteen minutes, it reproduces audio announcements that the user cannot omit. While it is the most common way to advertise on Spotify, it is not the only way to reach users.

The desktop version, the web format, or even the app, also have ads. Which allows users to reach the website of the ad with a single click. Companies have the option to make brand playlists with their logos and an optional link to a landing page.

You can also sponsor a Spotify session. A brand can offer its consumers thirty minutes of uninterrupted music in exchange for watching their video.

Advertising on Spotify is not cheap. The ads work with CPM. Publishing an audio spot costs € 40 per thousand impressions. Although this is a price on the rate. That is, Spotify makes custom advertising campaigns, varies depending on each case.

Although the platform is moving towards a more affordable advertising budget to attract more and smaller companies. In fact, the commitment of Spotify to offer a more competitive service makes it an excellent option for the needs of your advertising campaign.

However, although small businesses can not usually afford a massive advertising campaign, they can now advertise on Spotify much cheaper with Spotify Ad Studio.

How to advertise on Spotify

With Spotify Ad Studio, brands and advertisers can upload their audio ads directly to Spotify Ad Studio. And then configure the segmentation and budget parameters to execute it. And, even, track the campaign. Advertisers upload a script and choose background music, and the technology records a voice-over for the ad.

If you have a budget for a more extensive campaign, advertising on Spotify with video ads or banners may be another option. The ability to display short visual content offers another type of ad.

The fact that the audio content transmission service is a platform for visual content is an excellent opportunity for the future of advertising. Many great brands have launched massive campaigns in Spotify, associating with the company in several ways. These are some of the ways to advertise on this music streaming platform. 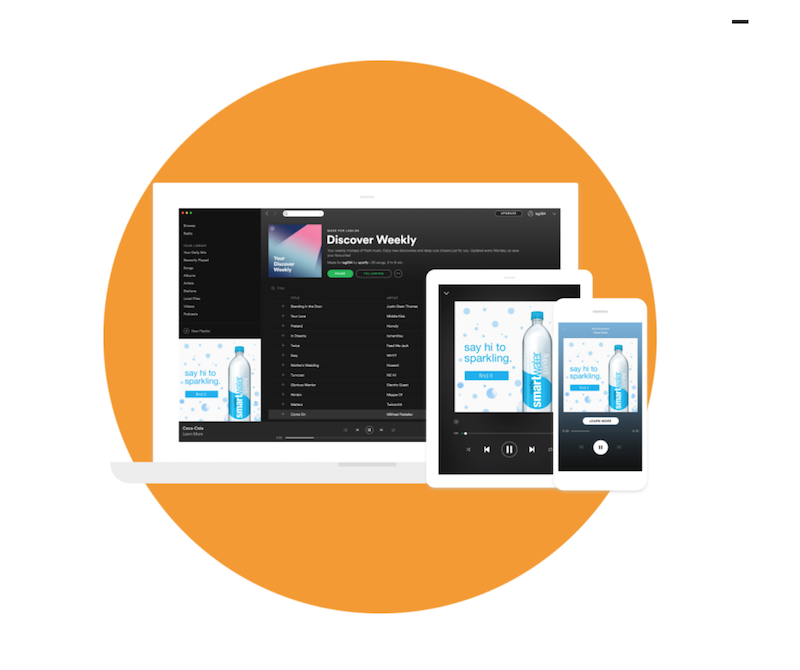 All Spotify audio announcements are played between songs. Audio ads are also applicable to all devices, so they can be heard on desktop computers, mobile devices, and even other devices such as television.

Spotify limits to have a duration of 15 to 30 seconds. These audio ads have a specific feature. While playing the audio in the program, you see an image, like a poster that can be clicked on. The interaction between the two is what makes a Spotify audio ad a bit different from the usual audio spot.

There are two options: 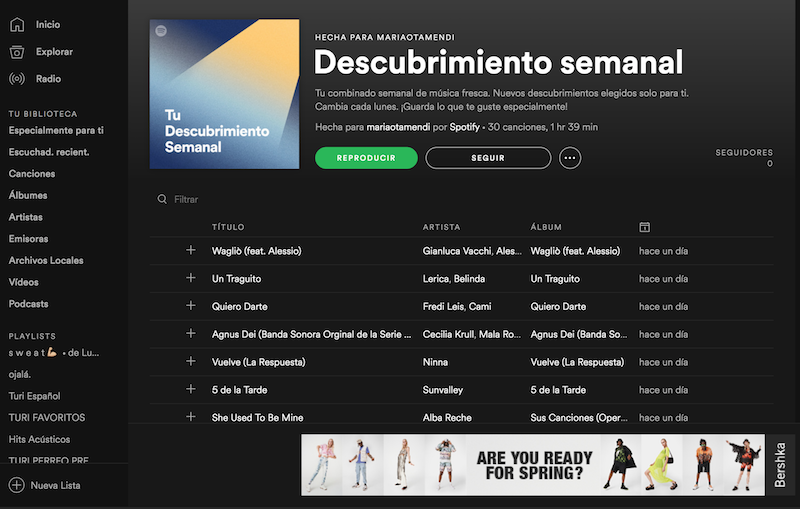 The display ads on Spotify are more or less the same as the ones you can see on other platforms. Display ads are shown to users for 30 seconds, remain visible all the time (unless Spotify is minimized). And do not show up at the same time as another ad.

In general, banner ads are displayed at the top of the Spotify browser when a user signs in. Then, when you are already listening to a playlist or song selection, the display ad moves to the bottom of the page.

The display ad is presented when the user returns to the Spotify app. You can click on the ad, and it takes you to the corresponding website. There are three types of display ads as you can see here. They are the following:

4.- Sponsorship, make your own playlist on Spotify

Advertising on Spotify may be too expensive for some brands. But it is an excellent marketing move that will not entail any massive outlay of money: create a playlist.

Since the inception of Spotify, billions of playlists have been created by individuals and brands alike and can help spread the name of your company. Creating a playlist for your brand is easy, fast and does not cost a single euro (unless you want to sponsor it for something in particular). Nike Women, for example, has a playlist for runners, for high-intensity workouts or for the Gym.

Advertising on Spotify is an excellent option. But creating a brand playlist is also a great marketing strategy. It is free and provides a method to interact directly with users.

A Spotify playlist makes your brand look real and authentic. It allows you to stand out and distinguish yourself. Deciding how to make your Spotify playlist and use it as an interaction with your customers is a fantastic and economical marketing move.

The reach of the advertisement, its most significant benefit

What makes Spotify ads special is their exceptional ability to direct them. They allow you to address particular audiences. Using Spotify’s user data, you can reach a target audience by age, gender, music genre, or a specific playlist.

That’s why, despite the investment you may require, the scope you can have is fantastic. Ads can be created based on the user’s listening habits. Antevenio will help you get the most out of Spotify ads.

In Antevenio GO, we are your perfect partner to create the best Spotify campaign. We are specialists in performance marketing. We will help you get the most out of this type of advertising