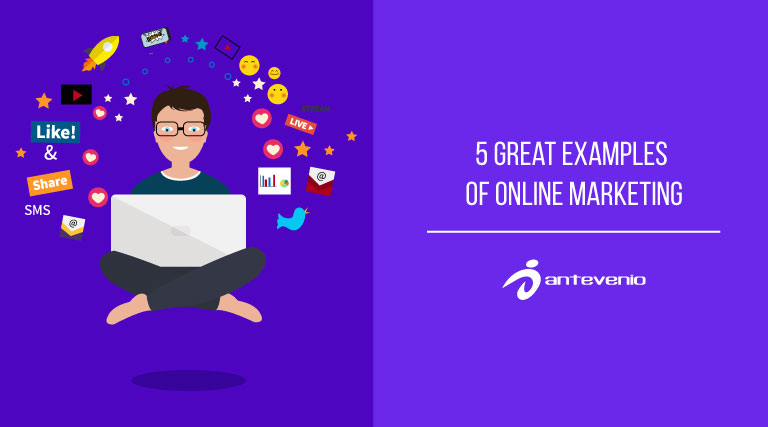 One of the best ways to learn in the new digital ecosystem is to look at the campaigns that really stand out; those great examples of online marketing that run by word of mouth and that consequently makes them gain even more effectiveness and visibility.

And it is that advertising is a social phenomenon with great impact on our daily life. Advertising techniques are tools capable of influencing society, as they generate emotions, motivate or call for reflection. Do you want to learn from them?

Today, we bring you 5 great examples of online marketing that can be useful as an inspiration and that, without question, will make your hair stand on end. 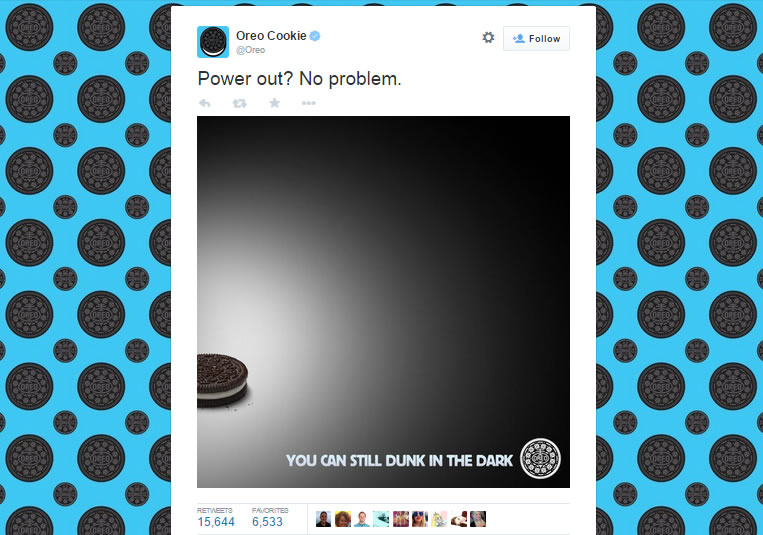 It was February 2013 and during the Super Bowl, the sporting event that attracts the most television audience worldwide every year, there was a blackout. Several brands took advantage of the situation to launch creativities about what happened.

However, it was Oreo the most creative brand as a consequence of the above image that they published on Twitter. The slogan “You can still soak it in the dark” contained everything necessary to become viral. And it not only worked on social media, as it spread to mass media.

Oreo’s people stated that they had good luck. In fact, the creative team was gathered when the blackout happened and knew how to approach the situation as an opportunity to take advantage of.

This example shows that creativity will always be valued. Either in an unexpected situation that has been taken advantage of or in a campaign prepared beforehand, like the one LG launched while taking advantage of the lifts of a well-known business center to show their new monitors.

The campaign tried to show the clarity of the LG screens and the realism they produce in the mind of the viewer. So much, that they released this original video.

Always emphasizing realism, LG replaced elevator floors with screens. In this way, as they were lit and displayed images, it seemed that the elevator was plummeting. The video has more than 26 million views on YouTube. Fear generates impact, and the impact makes the brand be remembered.

The key is to look for the most unexpected places. Therefore, LG continued with this dynamic and launched more videos of this type.

2.- “Yes, we can”. Obama receives artists’ support on YouTube

The presidential campaign of Barak Obama in 2008 can be considered one of the great examples of online marketing in politics. It all started with the New Hampshire speech in which he delivered the famous slogan “Yes, we can”. From then on, multiple actions were carried out.

However, one of the elements that marked a before and after was the video created by Will.i.am. The Black Eyed Peas’ singer, created what was the first song in history inspired by a political discourse. And, interestingly, it was not organized by the managers of the Obama campaign.

In fact, the song was uploaded on YouTube. The only thing that the campaign managers did was to help its dissemination. Today, it exceeds 25 million views.

Both Music and YouTube are also one of the foundations of a historical campaign, Baby & Me by Evian, which now exceeds 136 million reproductions.

Under a Yuksek remix of the theme “Here comes the Hotstepper”, the bottled water brand Evian exploited its claim “Live Young”. In the campaign, it is observed how a group of people dance in front of a mirror that shows them as babies.

Everything revolves on the basis of youth. That is why it teaches how drinking water helps the body to “live Young”. And all that was supported with catchy music and an exercise in creativity that puts the smile in the mouth of anyone who sees the video.

This viral video is the continuation of a first part that also achieved a great impact. However, the latter even included an application for users to create their own images as babies.

3.- Ellen de Generes and the most shared selfie in history 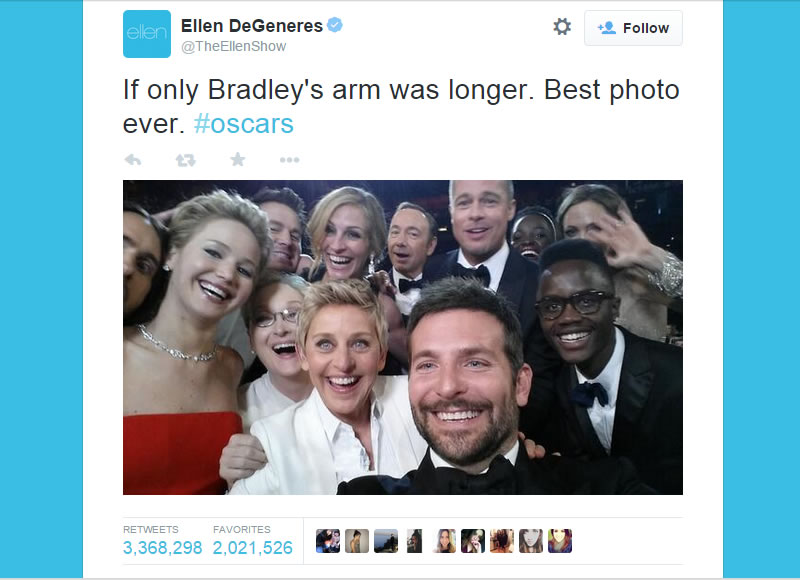 The 2014 Oscars ceremony was sponsored by Samsung. In fact, the brand invested 20 million dollars in the event. Among other actions endowed by the presenter, Ellen DeGeneres, with the help from a smartphone of the Korean company. And so the boom came. DeGeneres was focused on taking selfies and document the in-between of the gala while sharing its best moments. With whom? With its 26.7 million followers.

That was how a multitudinous selfie was reached as the product of chance. DeGeneres was going to take a picture only with Meryl Streep when, spontaneously, other iconic people of today’s film industry joined them: Julia Roberts, Brad Pitt, Angelina Jolie and Kevin Spacey were some of them. When she saw that, she published a challenge: “Let’s take a picture that beats the record of retweets”. In fact, the photo was taken by Bradley Cooper because he had the longest arms.

However, not everything was sending the photo. Samsung achieved that the million RTs that were made in just over half an hour continued until becoming the most shared tweet in history. For this, they dedicated efforts in social media to promote and amplify the tweet, turning it into a meme and encouraging the humorous versions that were made in the following days.

The only objection to this case was that, after finishing the ceremony, Ellen DeGeneres continued taking selfies in the backstage but now with her personal mobile, an iPhone. This laid on the table a subsequent debate about the hiring of influencers who are actually not clients of the brands they advertise.

One fact worth considering is that the most shared selfie in history had its origin in a television broadcast, which is something somewhat usual among the most impressive online marketing projects. The combination of television with social media guarantees a huge success. As also demonstrates the iconic jump of Felix Baumgartner with which he achieved three records.

Red Bull squeezed the marketing of extreme emotions. Under the slogan “Red Bull gives you wings”, the Austrian brand has cemented its image around everything that triggers the adrenaline and brings the human being to its limits.

That is why supporting this initiative allowed them to enter many television stations around the world and, subsequently, continuing taking advantage of the pull on YouTube. His jump has already been seen by more than 41 million users.

4.- The Blair Witch Project, a viral phenomenon before the boom of social media

The Blair Witch Project is a film that used a special promotion before social media was born. However, it still managed to become one of the great virals in history.

As explained in its Wikipedia entry, the film tells the story of three young filmmakers who disappeared when they were filming a documentary about a urban legend. The protagonists walked through the Black Hills near Burkittsville in 1994 to record everything about the “Blair witch” legend. The movie claims that the three young men were never seen again. However, their equipment was found years later.

The interesting thing was the way to advertise and promote the film. The rumors that sustain the film became credible when they were backed in digital forums and low budget ads. All this allowed a production that costed $22,000 to raise more than 250 million dollars.

At the other end is another of the great examples of online marketing, but this time it is an advertisement shot as if it were a movie. TNT stars on it along with the agency Duval Guillaume Modem. The proposal, summarized under the slogan “We know drama” was cataloged as the second best viral advertisement of 2012. And it is not because of nothing.

In less than 24 hours after it was published, it obtained more than 10 million views on YouTube and another million on Facebook. “A dramatic surprise in a quiet square” launches a powerful idea in the field of guerrilla marketing:

In a quiet square where nothing happens, a red button was placed pointing to a sign indicating “Push to add drama”. So when being pressed by one of the pedestrians it launches a chain of events that turn the place into the scene of an action movie.

The campaign was created to be launched in all media in Belgium, but it was not necessary. It had such a huge impact that it immediately spread. In fact, it currently has more than 54 million views and it keeps growing.

In addition, a second part was launched in the Netherlands under the name “A dramatic surprise on an ice-cold day” that has almost 16 million views.

5.- The iJam 5Js of Shackelton

During the Christmas campaigns it is common for many companies to try to offer creatives that tend to become the hit of the season. From the Christmas lottery campaigns to the Freixenet bubbles or the “Come back home for Christmas” of El Almendro nougat are widely known examples in our country.

One of the most memorable was iJam, a successful campaign by Shackleton agency that mixed a very traditional product, ham, with the aesthetics and marketing concepts of Apple.

The key to becoming a viral that crossed borders was to parody and sell the ham as if the campaign had been designed by Steve Jobs himself. For this, a web page was designed as well as a humorous video that was posted on YouTube.

Interestingly, according to those responsible for the agency, the largest investment was the transport of 700 shoulders with packaging similar to those used by Apple for its products, which included ham and a CD.

However, a good viral does not need Christmas nor is it simply a promotional action. There are also viral ones like “Dumb ways to die”, one of the most successful campaigns in the world and one of the most viral ones on the internet.

The video was released in 2012 by McCann, and it is a campaign for Metro Trains Australia. It was created with the aim of raising awareness about the danger of train tracks, as at that time, there were many cases of deaths due to lack of precaution on the tracks.

The video shows characters dying in silly ways until they reach the deaths caused by not respecting the railroad tracks. And it caught the attention of its target audience. It managed to get out in all the media in Australia and soon after, in the media around the world. In fact, deaths because of these causes were reduced by thirty percent in Melbourne.

It currently has almost 143 million views on YouTube. Its impact has been so great that an app was created to play with its personal characters. In addition, in 2013 it became the most awarded advertising campaign in the history of the Cannes Film Festival with 18 Golden Lions.

Do you need advice to start an online marketing campaign?

In Antevenio, we have an internal professional team that is in charge of managing in real time your display advertising campaigns, programmatic buying (RTB), e-mail marketing, search engine marketing, social media and video advertising. Antevenio is a Spanish company specialized in digital marketing founded in the distant 1997 and it has more than 200 employees in 7 countries: the US, Spain, Mexico, Colombia, Argentina, France and Italy.

To request information about display ads with Rich Media

To request information on Advertising and RTB Programmatic Buying

To request information about Influencer Campaigns and Content Marketing