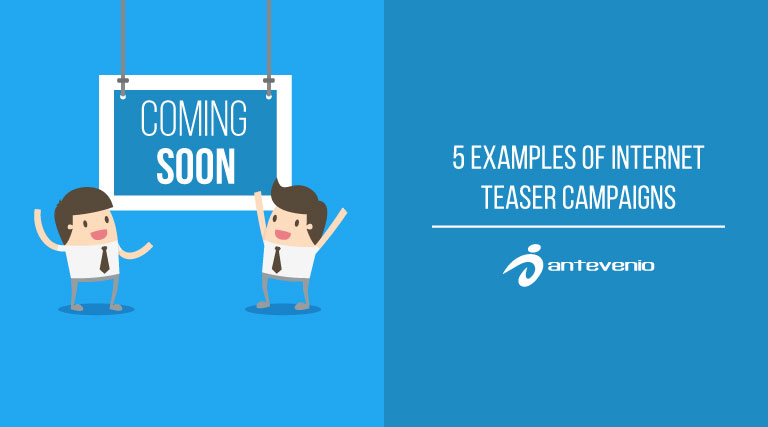 We are all curious by nature. We wish to know what is happening around us and be always up to date with everything. If there is something that makes us curious, we need to know more about it and to discover what it is about. It is for this reason that teaser campaigns on the Internet or campaigns that generate curiosity are excellent both to attract new users and to launch new products.

The main objective of a teaser campaign is to cause the user’s curiosity. Most of the time, this kind of campaigns do not reveal the product, but they always show some distinctive characteristic of the brand: typography, colors, style, etc.

Therefore, we can define an Internet teaser campaigns as an advertising fragment often used as a foretaste of a main campaign, and which usually offer minimum information with the aim of playing with the mind and emotions, and thus stimulate the users’ curiosity. It is an ideal tool to generate great expectations.

How do teaser campaigns work?

The good thing about Internet teaser campaigns is that they can be adapted to any kind of communication platform. Social networks are a very popular channel, and also very inexpensive one if you do not have a large budget to launch the campaign.

They are basically great campaigns for new products or services, as they allow you to attract the customer’s attention and invite him or her to try something new. Additionally, if the campaign is a good one and creates a good level of curiosity, it will spread like wildfire among the users.

Steps to create a teaser campaign

When you consider the use of teaser campaigns on the Internet, it is necessary to take the following aspects into consideration:

There are many companies that have used teaser campaigns correctly, achieving their main objective: to create curiosity and expectation among users. Here, we will tell you about five Internet teaser campaigns that made it.

Naughty Dog wanted to develop a viral teaser campaign to introduce its latest Playstation 4 videogame, called Uncharted, for the first time. For this, they developed a video that created excitement among users and they took advantage of the popularity the Playstation 4 already had.

The company opted for something innovative. It put aside traditional video game ads, and created an ad using scenes from the game itself. The announcement is narrated in the first person from the protagonist’s point of view. The protagonist’s voice and the music that accompanies him make the user feel as part of the game. It includes the viewer, letting his/her imagination fly and generating a great deal of curiosity.

Ultra Music Festival is a music festival held annually in several countries around the world. This year, it has created a teaser campaign announcing that, among other places, the festival will be held in Brazil this year.

The ad uses fantastic images of Brazilian landscapes, and also, scenes from previous festivals, in which you can see multitudes of young people enjoying the experience. During the ad, you can hear a female voice announcing the festival will arrive in the country in October this year, although it specifies that the city in which it will be held has not yet been confirmed.

In the advertisement’s video, the phrase “Coming soon” is used, creating expectation in the user and leaving him curious and wanting to know more about the festival.

Tezenis, along with the singer, model and actress Rita Ora, present a campaign introducing briefly their new collection, which will be launched soon.

The company uses the model’s image to advertise the new collection, and in this case, the exact date of the launch is announced at the end of the video. In this case, RitaOra X Tezenis launched this campaign two weeks before launching their new collection.

In this ad, we can see how Mercedes broke all the molds we got used to, and opted for something completely new. In general, the company chooses ads in which the vehicles they advertise usually appear; but in this case, they leave all the curiosity to the user without showing anything of the car that is the object of the campaign.

Also, the ad shows two young men talking about a car one of them is going to buy. He does not specify anything about the vehicle, but tries to cause envy in his friend saying it is a car nobody has bought yet. In this way, they cause expectations and curiosity in the user, two basic axes of Internet teaser campaigns.

Nike  offers a short ad using as a powerful tool all the familiar faces that can be seen in it. The ad does not provide any direct clue of the product it offers, but the choice of players lets users know it is a product related to soccer.

At the end, the date on which the product will be launched is provided. It is an effective campaign that creates in the user a lot of excitement.

As it has been observed, Internet teaser campaigns are a great tool for any company as they are campaigns that generate interest. They prepare the viewer for the final announcement, which will be launched later. During the time between the campaign and the advertisement itself, they keep the user expectant and they generate a need to know what the company is offering.

After all, it is about the art of provoking people, and if you can provoke them, the campaign can become viral in a short period of time. The real trick of Internet teaser campaigns is a good, clear, simple and provoking message.

Do you need a solvent agency with digital experience and solvency?

At Antevenio, we have an in-house professional team in charge of managing your advertising display campaigns, programmatic purchases (RTB), e-mail marketing, search engine, social networks and video advertising marketing campaigns in real time. Antevenio is a Spanish company founded in the distant 1997 specializing in digital marketing, with more than 200 employees in 7 countries (USA, Spain, Italy, France, Mexico, Colombia and Argentina):

To request information on leads collection and generation

To request information on display ads with Rich Media

To request information on RTB Advertising and Programmatic Purchases

To request information regarding Marketing in Social Networks